Of the Amphibian kind

As you’ve probably guessed by now, I love sitting out by my pond every day. The gentle gurgling of the fountain, the flashes of colour as the fish swim past, the bird calls in the yard around me. My tranquil oasis of peace and beauty where I recharge my battery and meditate on the wonders of God’s creation and all His blessings. Sometimes I get a surprise visitor to my oasis, at which point I shatter the peace and quiet by yelling at my longsuffering son, “Grab your camera and get out here!”. He has been very patient with me this summer and hasn’t missed a shot.

I love frogs. All of them. They are such wonderful little creatures. I had three of them in the spring, thanks to a neighbour who had an overabundance in his pond. They stuck around long enough to lay a bunch of eggs and then they left for some reason. I don’t know why. I think my pond is wonderful but they obviously didn’t. I do have dozens of tadpoles now though, which gives me hope for future frogs for my pond. I was content in the knowledge that next summer I would have frogs. Then one day, as my husband was cleaning out the filter, he calls me over and points. There, right beside him, seemingly unphased by his nearness, was a little green frog! 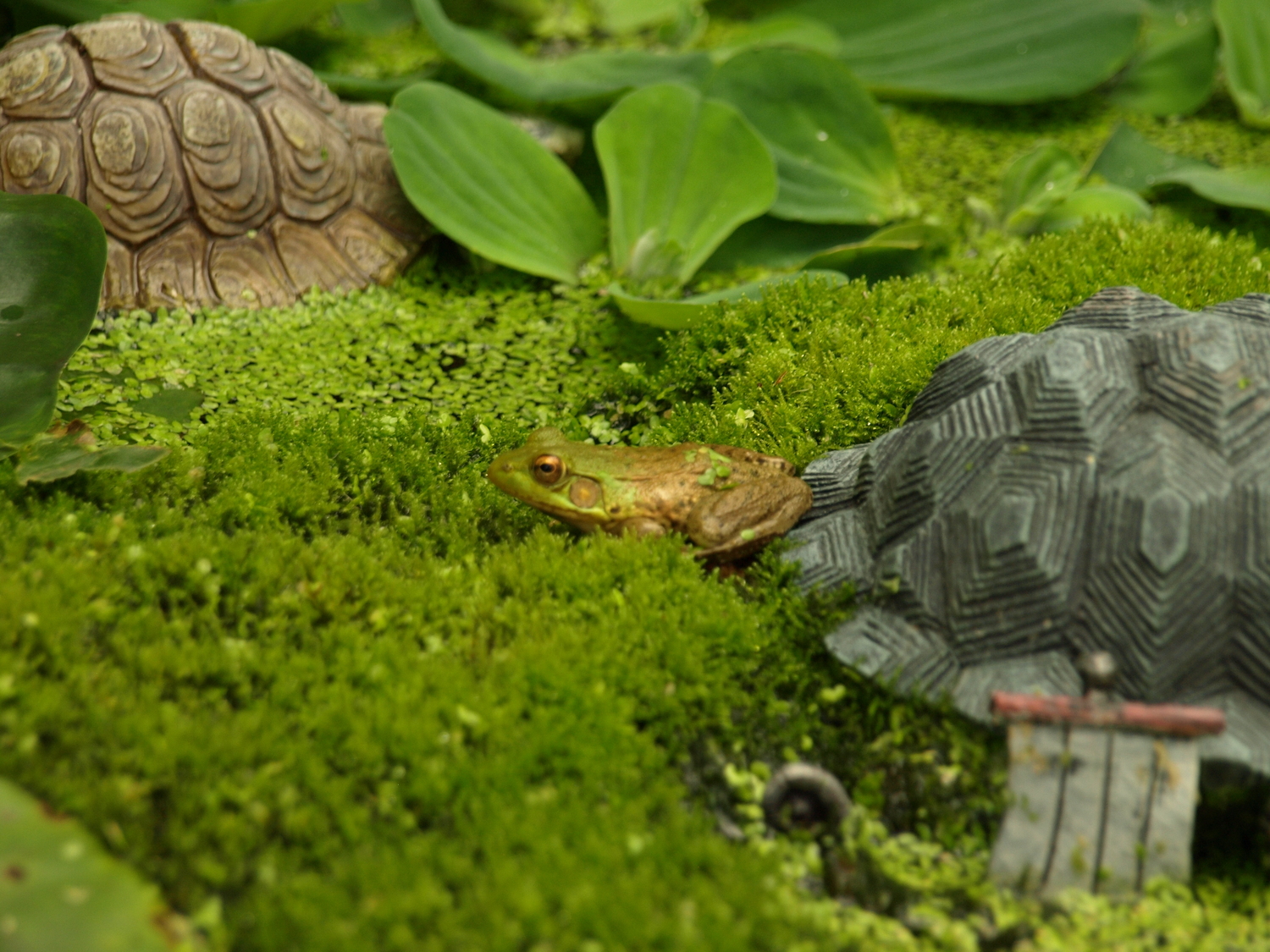 To say I was thrilled is an understatement. I immediately dubbed him “Johnny” since he has come lately. I’m thinking that he just morphed this spring and was looking for a pond of his own. We had a good storm the night before he arrived and I know that frogs use rainy days and nights as opportunities to travel to new ponds. Each day, as I fed the fish, I would check on Johnny and make sure he was still here. I was suprised one day to see that Johnny had a friend. Lovely! Two frogs!

Of the Reptile kind

I’m sure some of you will think me odd, but I like snakes. I used to have a pet corn snake. On the farm we had frequent sightings of garter snakes and we always left them in peace or moved them if they were in danger. You won’t hear any girly screams from my family if someone spots a snake. Quite the opposite in fact. Definitely a “grab the camera” moment. I’m a little nervous knowing there are snakes around but only because I know frogs and small fish are on the menu and I have both! Oh well. After all that is what God designed them to do.

This lovely guy was sunbathing in front of the BBQ one day. He didn’t mind posing for a couple of shots. Then we left him to finish warming up. 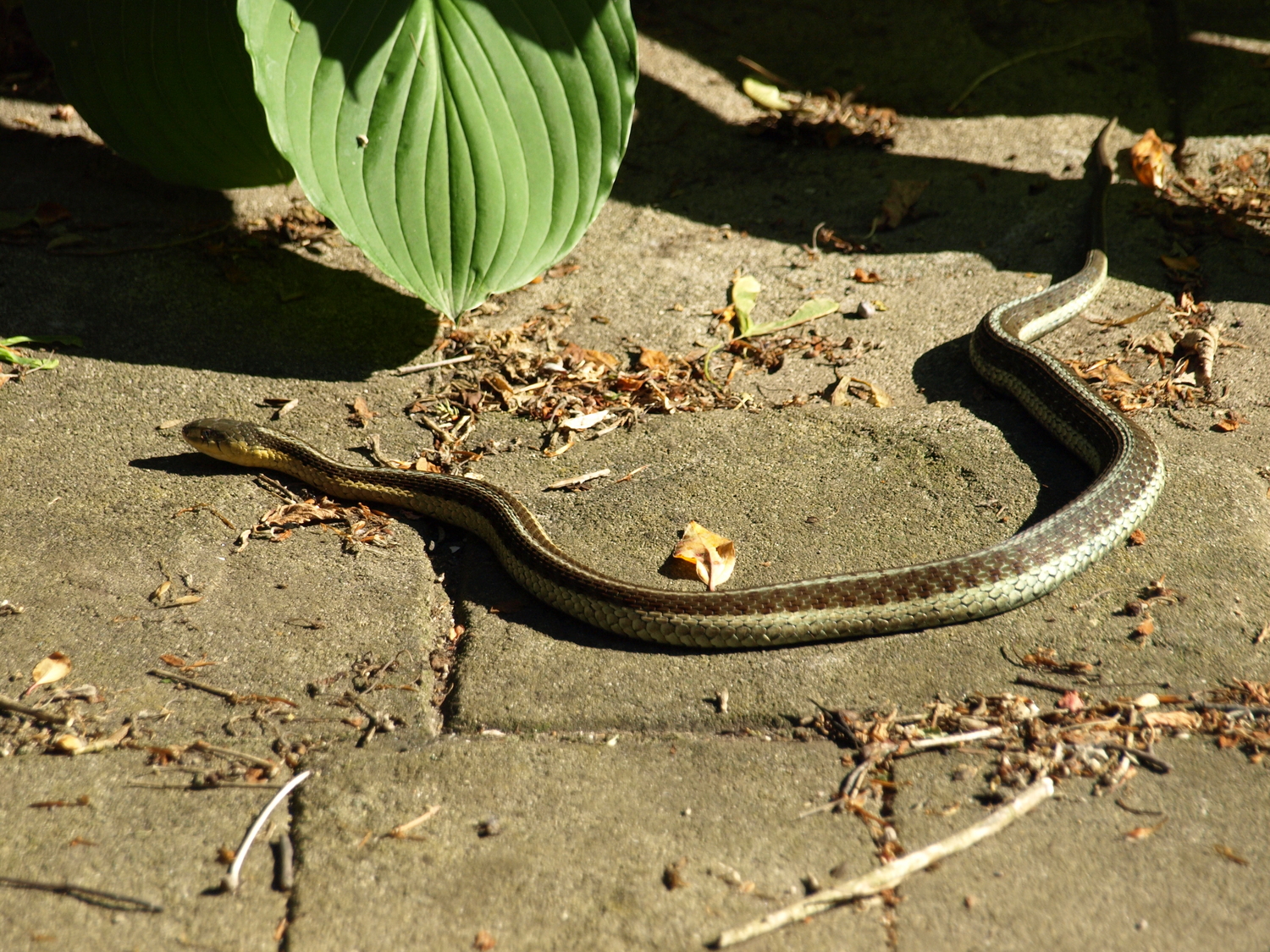 Of the Arachnid kind

While most of you likely don’t share my love of snakes, I’m sure you’ll share my feelings about spiders - best seen from a distance, or not at all! While I can appreciate the role they play in creation and the beauty (don’t argue) and design that went into them, I do not like to be surprised by their sudden appearance, nor do I like to be anywhere near one of a decent size. Unfortunately, spiders love gardens! All those places to hide and ambush insects. All those lovely tall flower spikes which are perfect for spinning their webs between. I get it, and for the most part I leave them be. If we have big ones in the pool house, they die!

I have a couple planters that sit on the deck railing and I did notice some web there, especially the one day when it stuck to my elbow as I reached over with the watering can. No spider in sight, no problem, just brush the web off. The next day, silly me, I forgot about the web and did the same thing. As I felt my arm brush the web, I caught some movement out of the corner of my eye. I looked over to see a very large spider scurrying in the right direction, away from me! Well, I didn’t scream, but I did get a major case of the heebie-jeebies! Lots of shuddering and frantic wiping of the arm that had the web on it. Into the house I went to tell my tale of woe to my husband, who happens to be the family appointed spider killer. When he went out to look he couldn’t find it.

The next day I approached the planter cautiously and there was the web, perfectly restored, and there was the spider, in the middle of the web! This time calmer heads prevailed. I knew the spider was there, I was expecting that it would be, so seeing it didn’t bother me. It was in an out of the way place, not bothering anyone, so I decided to let it be. I dubbed her Charlotte (of course) and she can sit there happily until the cold weather kills her. She runs and hides when I come around with the watering can but I am careful not to damage her web. I looked her up in my bug book and I think she’s a barn spider. She’s actually quite beautiful with different colours and intricate patterns. The picture doesn’t do her justice but she insisted on sitting there like a lump. 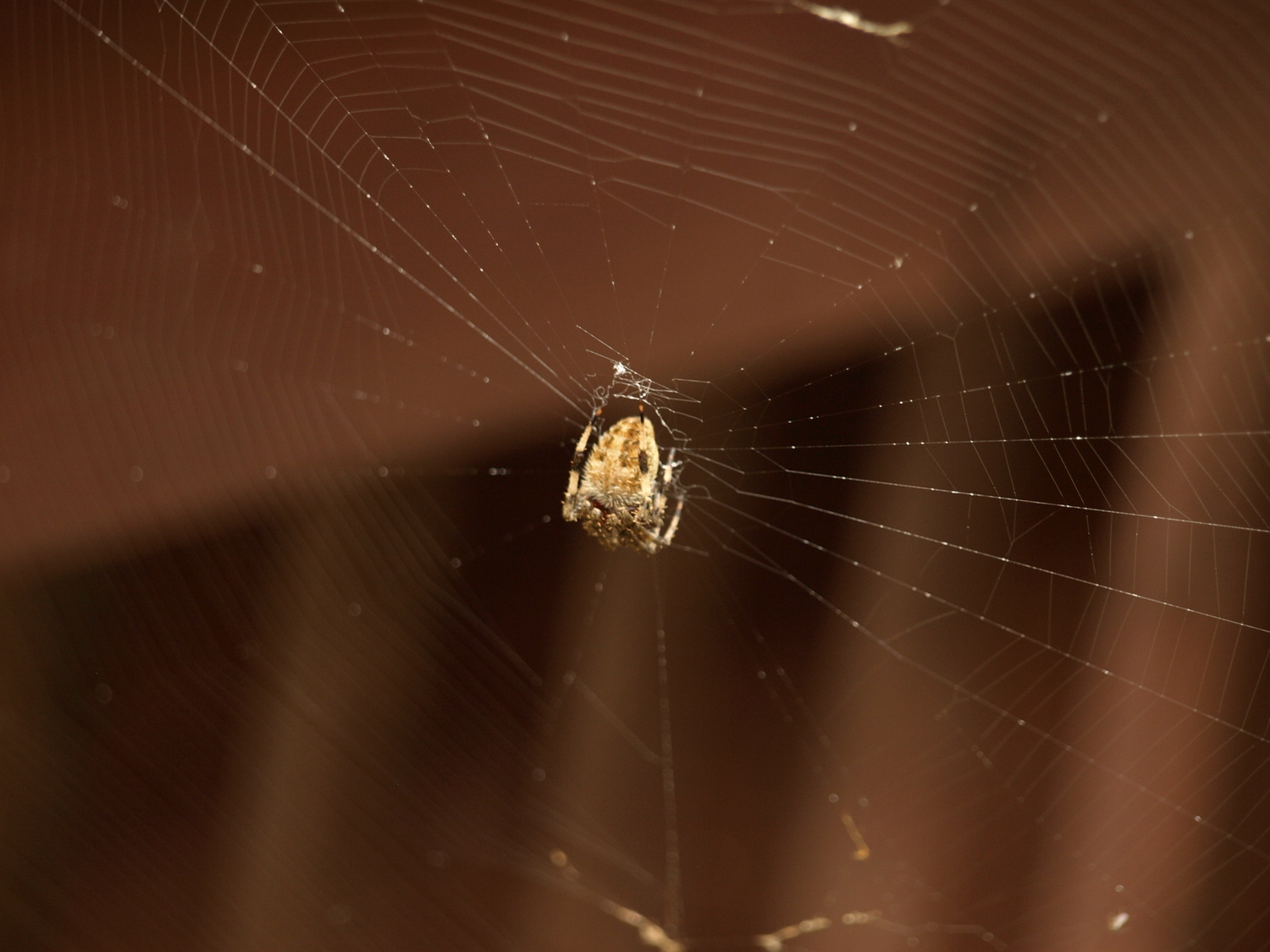