I have a large city lot and it is full of gardens. When we bought this place the gardens were pretty basic. There is a lot of shade and part-shade in the gardens so the previous owners had lots of hosta lilies. Now, I like hostas but I mean that’s pretty much all they had! Very low maintenace gardening. I’m all for low maintenance but I want flowers too. They had very few things that bloomed other than the hostas a few shrubs and some day lilies. It was a very deer and rabbit proof area for the most part but I didn’t find it that pleasing visually.

Every summer since we moved in, I’ve been redoing the gardens. Six years later and I’m now done and there is always something blooming in every bed. One of the things I learned very quickly as I was busy buying new plants, is that we have a large rabbit and deer population in our area. It didn’t take me long to figure out what not to buy at the nursery. It was so frustrating because the rabbits and I have the same taste in plants. I would buy a plant that had the most beautiful blooms and that looked absolutely lovely in my garden and the next day there would be a very satisfied looking rabbit sitting there beside what was left of the plant, looking at me like, “that was fabulous, got any more?”.

The rabbits are on my lawns all year long. In the winter they come out at dusk and dawn to forage under the bird feeders for a few hours. In the summer they are around all the time and will happily graze on the weeds in the lawn if they haven’t been recently mowed. I don’t have one of those perfect suburban lawns, for which the rabbits are thankful. There’s lots of clover and violets and plantain, all bunny favourites. The deer aren’t around as much in the summer. They are off annoying the farmers and raiding their fields. My biggest problem time for deer is in the spring before the crops are in the fields. That’s when they will be in my backyard nibbling the hostas and day lilies and anything with buds, like my lilacs. In the winter the deer will join the rabbits in raiding the bird feeders but I don’t mind that so much. I just make sure that the feeder isn’t full so they can’t eat up all my supply of seed every night.

I have a couple of gardens that are just for me, no rabbits allowed. One is in the front and was only fenced off this spring, after I discovered that the rabbits had nearly killed my dwarf rhododendron. The fence is plastic coated wire, two feet high and the holes are small enough to keep larger rabbits out. Small bunnies can still squeeze through but they have small appetites and aren’t as destructive. Besides they grow quickly and won’t be able to get in for more than a few weeks.

The part of the backyard that contains the pool is completely fenced off and we went around and blocked up the few places where rabbits were still sneaking in. Now, like the front, it’s only baby bunnies that can get in, those who can fit between the holes in chain link. Back here is where I really let loose my inner gardener! It’s where I planted my butterfly garden. Forty feet of the most beautiful blooms I could find, in a variety of colours and sizes, to attract butterflies and bees. These are the plants that wouldn’t survive outside the fence. I’ve got coneflowers, asters, lupins, yarrow, tulips, gaura, torch lily and many others. 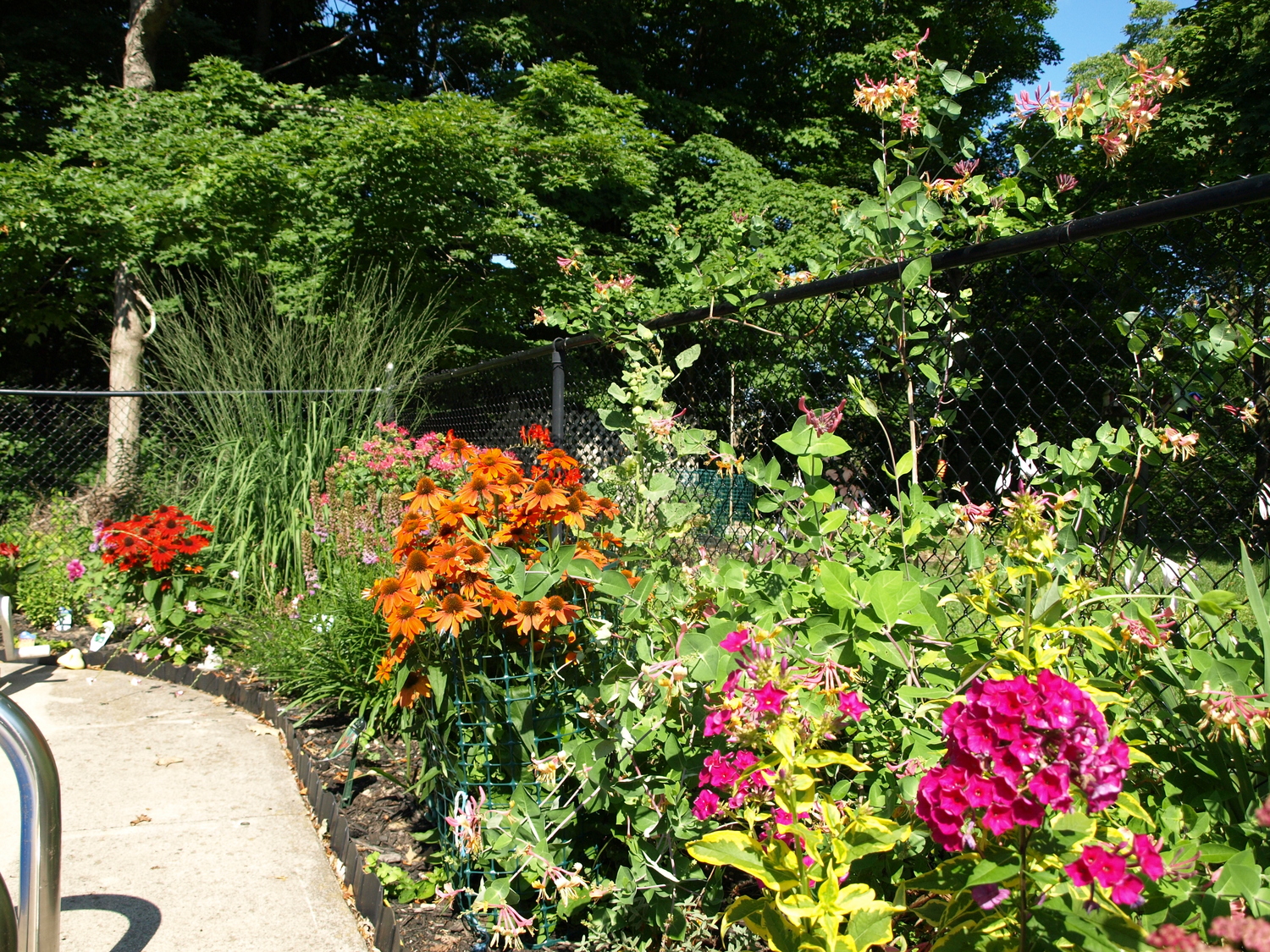 I have found that my list of plants rabbits won’t eat is not the same as other people’s lists, or even the same in the front as in the back! I have some black-eyed susans in the front garden that are a bunny favourite, although the staff at the nursery say they aren’t. I have a larger patch of the same plant in the backyard, unfenced, that doesn’t get eaten. I don’t know why! I planted a few milkweed, which have a nasty tasting sap, but the rabbits munched them right to the ground. Nothing but the Monarch caterpillar is supposed to like milkweed!

Not on the Menu

I have a square garden right at the back of the property, on the edge of the ravine which I wanted to be low maintenace yet pretty. I did a bunch of research to figure out what to plant there so that I wouldbn’t be giving the deer and rabbits a convenient buffet, close to home. I chose two different rose of sharon, which promptly got nibbled by the rabbits, although lightly. I figure they were just trying them out since they were young and green and budding. They haven’t eaten them to the ground yet and it’s now been a few weeks. That, in my book, makes them rabbit proof! I also planted a really nice rose mallow that has dark leaves and red blooms. I have a pink rose mallow in the front that never gets nibbled on so I knew that was safe. I planted a butterfly bush which has been left alone by all but the butterflies. I have a burning bush in the middle but I have had to fence it off because it has been seriously nibbled by both deer and rabbits. It wasn’t on any list, I just really wanted some fall colour back there. 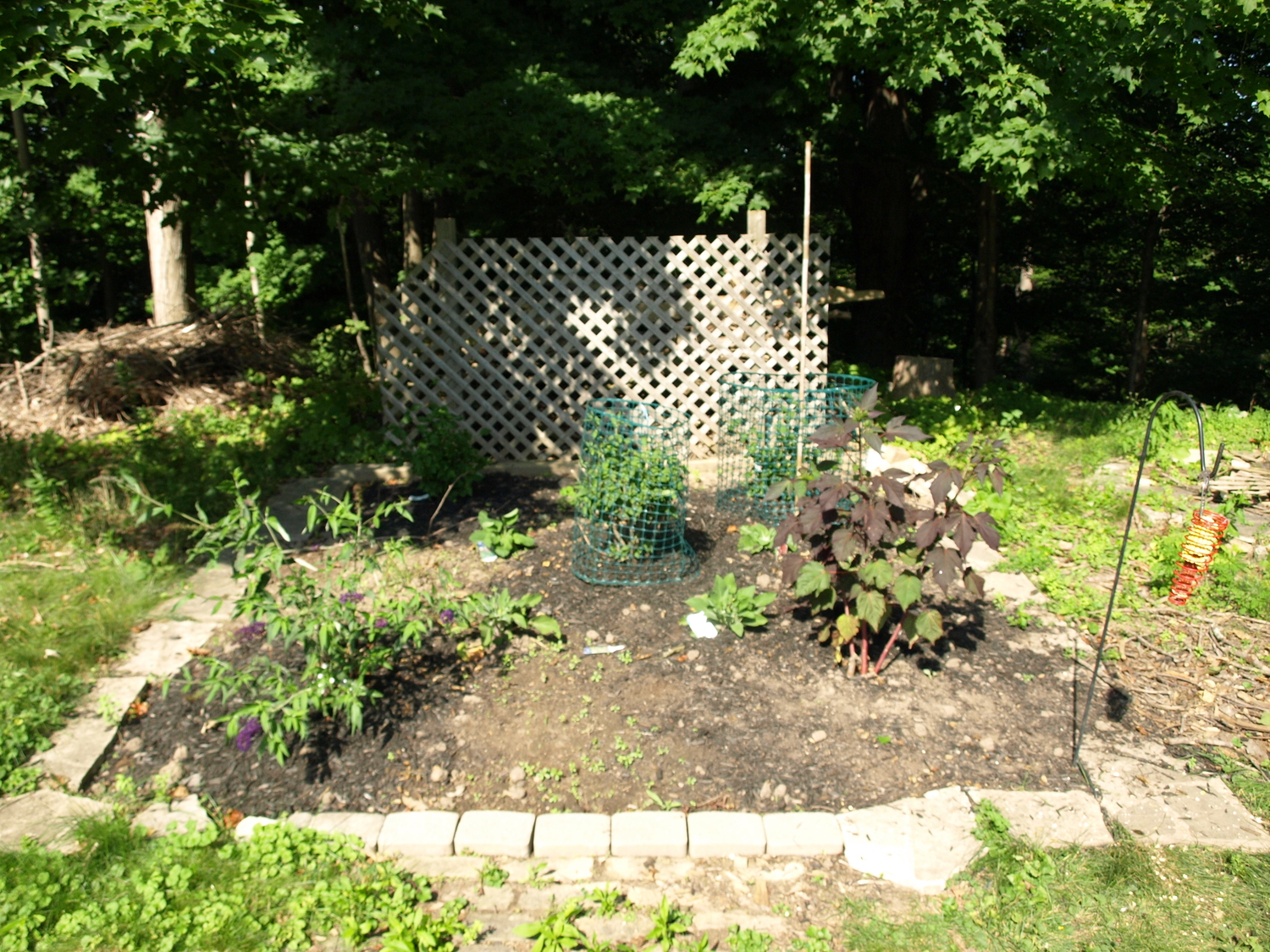 As for perennials, I planted a bunch of foxglove and scattered some columbine seeds. I can’t say enough about columbines. They are a favourite of mine and come in such diversity of shape and colour. They are hardy, self seed easily and can stand any conditions your garden has to offer. I have them in full shade to full sun, good soil to poor soil. They don’t care! They may get nibbled a bit but I find that insects do them more damage than rabbits. They will take over though. Where I had one, I now have 16! They are easy to dig up and transplant though. If you don’t want them taking over simply cut off the seed pods once flowers are done. If you want to seed them somewhere else, wait for the seed pods to rattle, that’s when they are ready. I’m also going to put some sun drops in the back. I have a whole bunch in the front and nobody eats them.

I have another low maintenace garden in the back on the side of the property. This one was put in place to prevent us having to mow right up against the neighbour’s fence. It too is deer and rabbit proof. It doesn’t have much flower power but it is nice and simple and serves the purpose. It has a couple of boxwoods, a bunch of ornamental grasses and a few hostas which I split off some of the massive plants in other places. It surrounds our rhubarb patch, which is another plant that nothing will eat, except us, with lots of sugar! 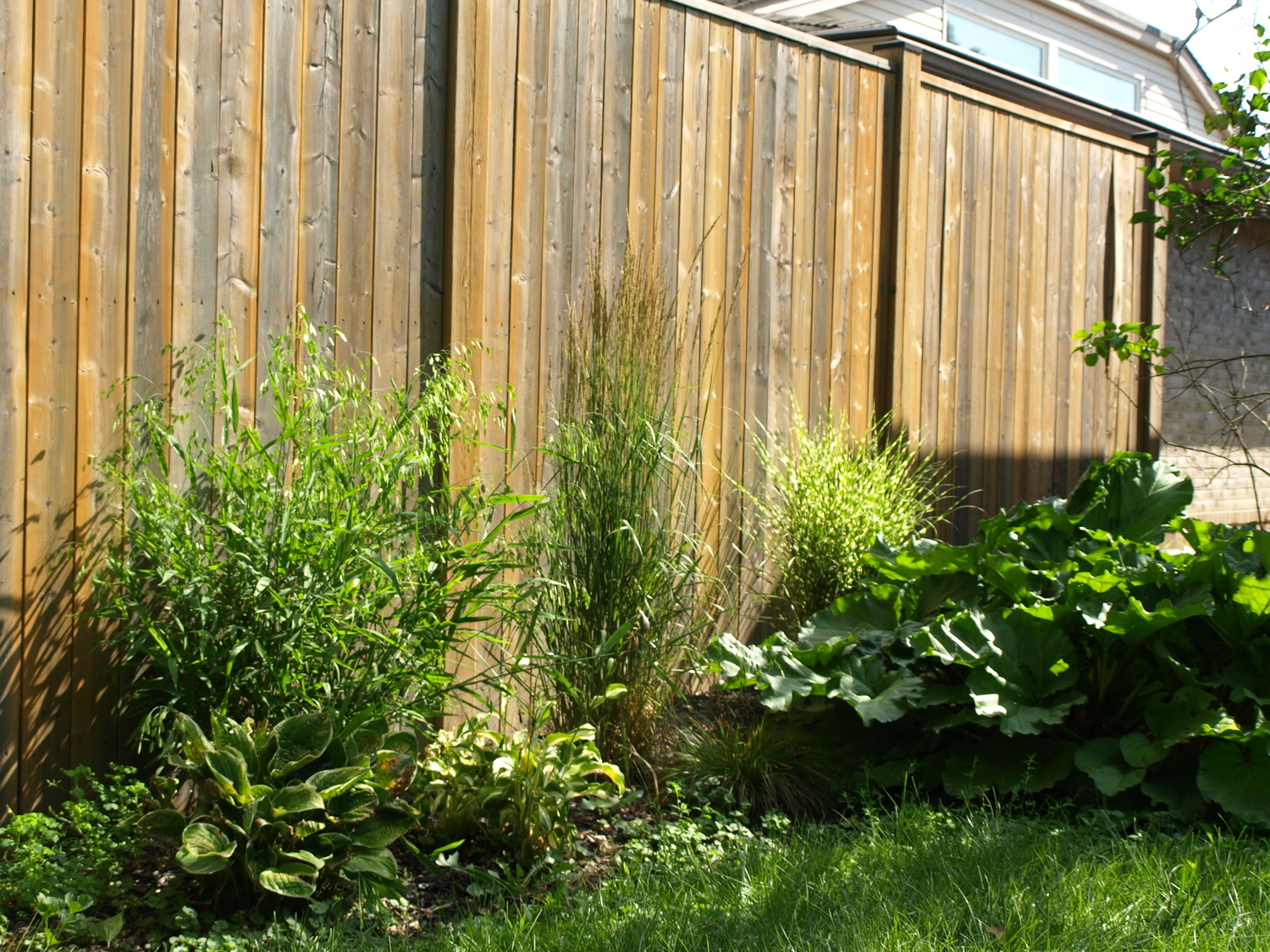 Trying to keep my plants from being eaten is always a challenge but I think I’ve finally got it figured out. At the end of the day though, I’d rather watch the deer and rabbits eat some of my plants than not see them at all. This spring we were treated to a visit by a doe and her twin fawns. They came to munch some newly emerging hostas and day lilies. I happily watched the fawns play while mom munched her way through the garden. They hung around for about half an hour and then headed back down the ravine. Now, mid-summer, I can’t even tell which plants she was eating. Some things are great for bouncing back after a light nibbling. I just make sure to keep the expensive, exotic varieties behind bars.