I’ve got a large pond in my backyard that I absolutely love. I spend some time every day sitting by my pond admiring the abundance of life. I will likely have several posts about my pond but today I’ll focus on the new life, the babies. In the spring we had a visit from a female green frog. She didn’t stay long but she left us about 100 eggs. My fish also spawned in the spring and have continued to once a month since then.

Both the fish and the frogs prefer water plants for their nurseries. The frog deposited her eggs in the pots that hold my hardy shallow water plants. I have Iris, Lizard Tail and Forget Me Nots planted in pots, in a row, on the shelf at the back of my pond. The shelf is about 8" under water to discourage raccoons from sitting on it and fishing. The pots are large so there is only a few inches of water over the tops. It’s the perfect place for frog eggs since the fish can’t easily reach them.

The fish prefer to lay their eggs on submerged plants. I’ve got Hornwort and Elodia for them. I also have a jungle of Water Lettuce and Water Hyacinth whose roots are another great nursery. The abundance of plants help to keep the water clear and the algae at bay. My fish are Shubunkins and they like eating plant matter so having lots of plants is a good thing.

I kept a close eye on the frog eggs, anxiously waiting for them to hatch. It took a couple of weeks but I started to notice fewer eggs. Where there had been a large patch, there were now only scattered smaller patches. I was worried that a raccoon or the fish had been snacking. Eventually there weren’t any eggs left. I stood over the back corner of the pond, where the eggs had been and this is what I saw. 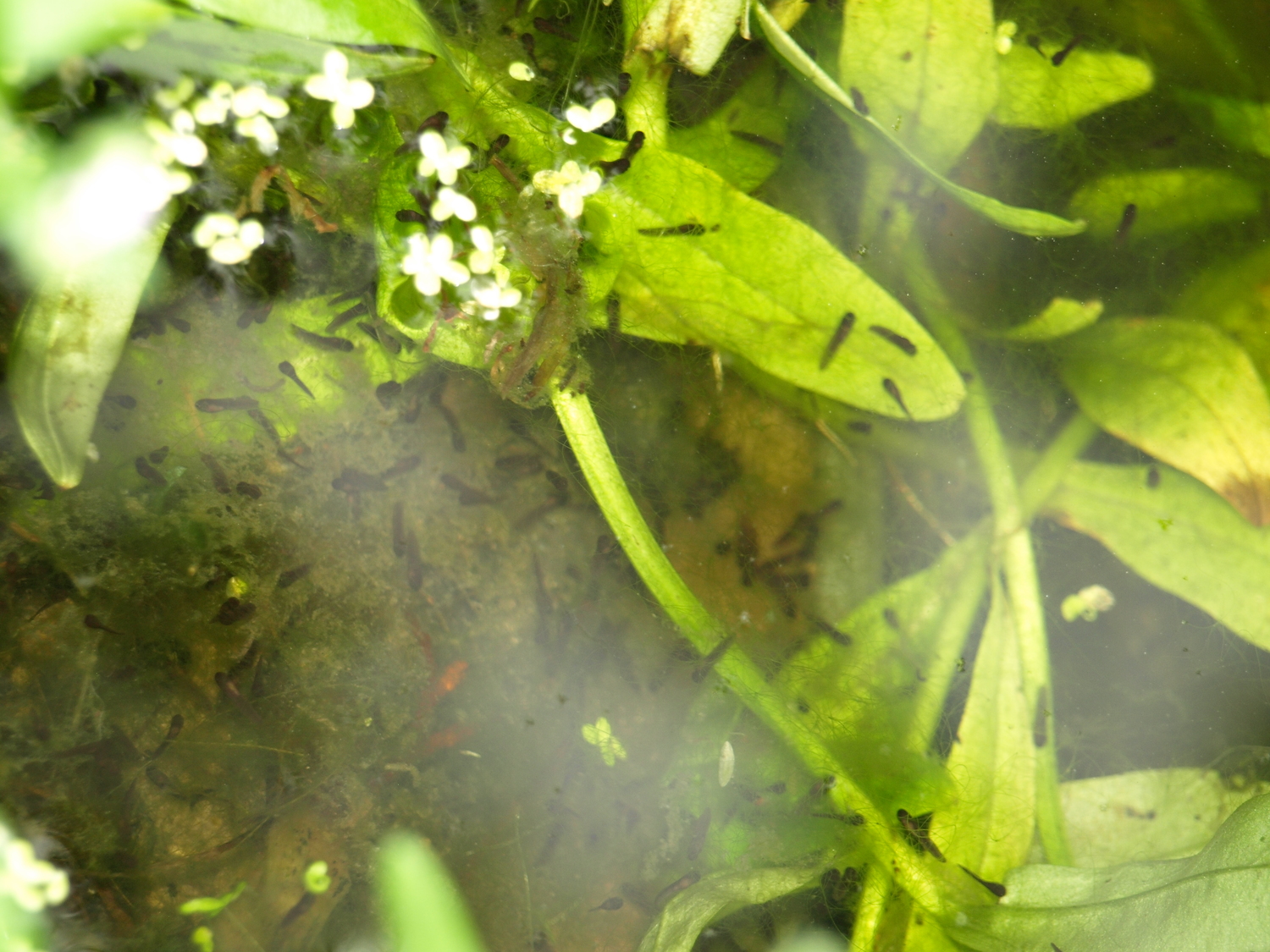 Swarms of newly hatched tadpoles! I was thrilled. I kept a careful eye on them over the next few weeks. They stayed near the pots, hiding in the thicker plants. Some days I couldn’t see them at all. I fretted like a mother hen. Finally, I noticed them venturing into open water. One of the reasons I’m so thrilled to have tadpoles is that they are God’s little pond cleaners. They eat all day long and prefer algae and dead plant matter. I had a bit more string algae than I liked but as the tadpoles grew they ate more and more. I no longer have an algae problem. A couple months later and all that eating has served the tadpoles well. 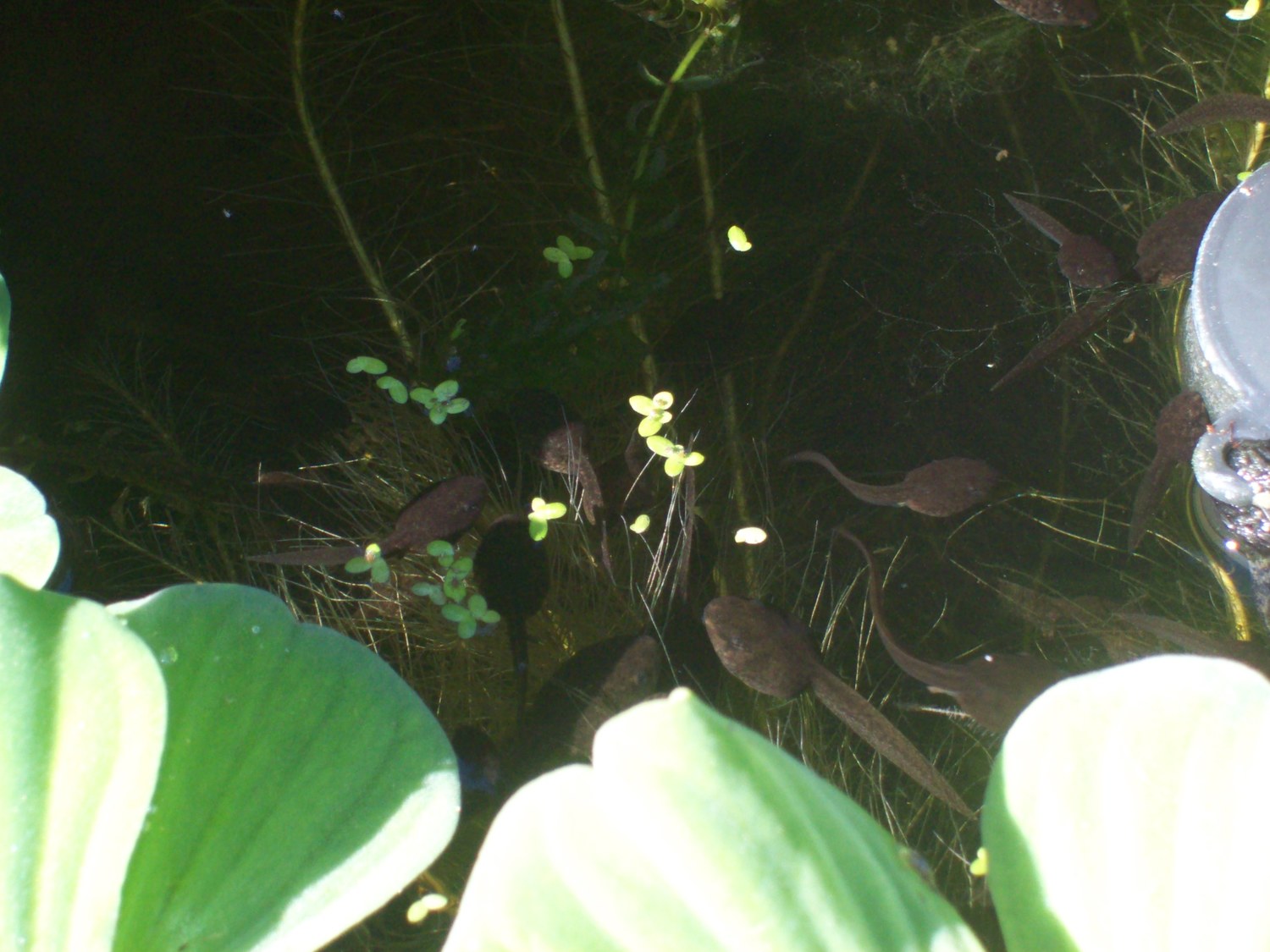 One of my concerns about the tadpoles was whether or not they would be on the menu of my fish. I have five Shubunkin but only two of them are large enough to fit a tadpole in their mouths. These fish don’t have teeth so whatever they eat goes down whole. Much to my disgust, I soon saw the biggest fish swallowing tadpoles along with the fish food. Thankfully I have way more tadpoles than I want and they are growing so quickly that they won’t be on the menu for much longer.

While I was busy keeping my eyes peeled for tadpoles, I started noticing other things in the water. Close to the surface, in the thickest of the floating plants, I would see little wriggling things. At first I wondered if they were mosquitto larvae that had escaped the fish. The other option was that they were newly hatched baby fish or fry. I looked online to compare them and it turns out they were fry! I was delighted. I did a bit more research and figured out that my two biggest fish are a pair and they’ve been spawning. The other day while sitting by the pond, I noticed three different sized fry all together in an open section of water. The smallest would barely show up in a photo but this is the middle sized one. 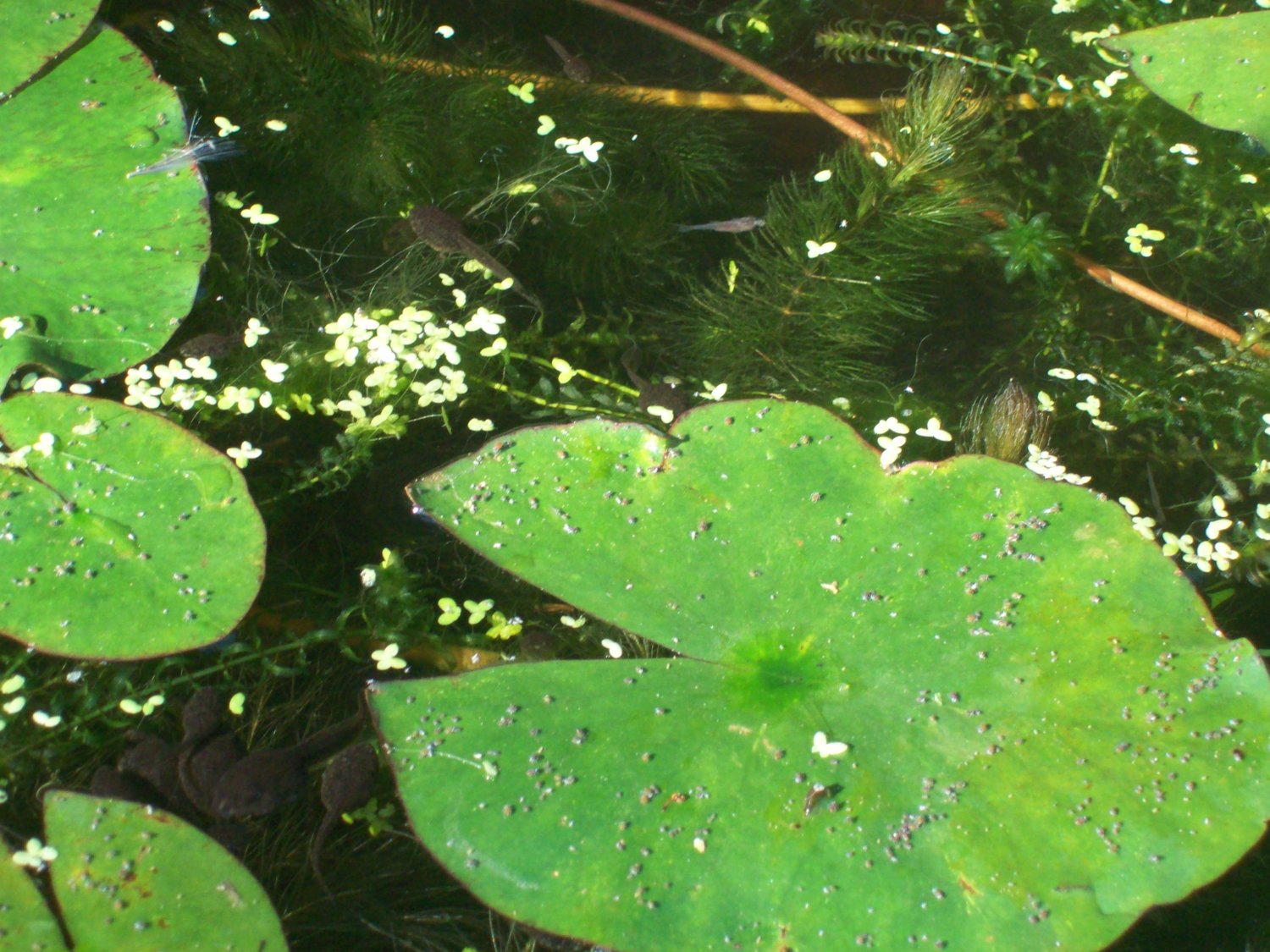 I spent quite a while watching them swim around. They are starting to form little schools of their own. 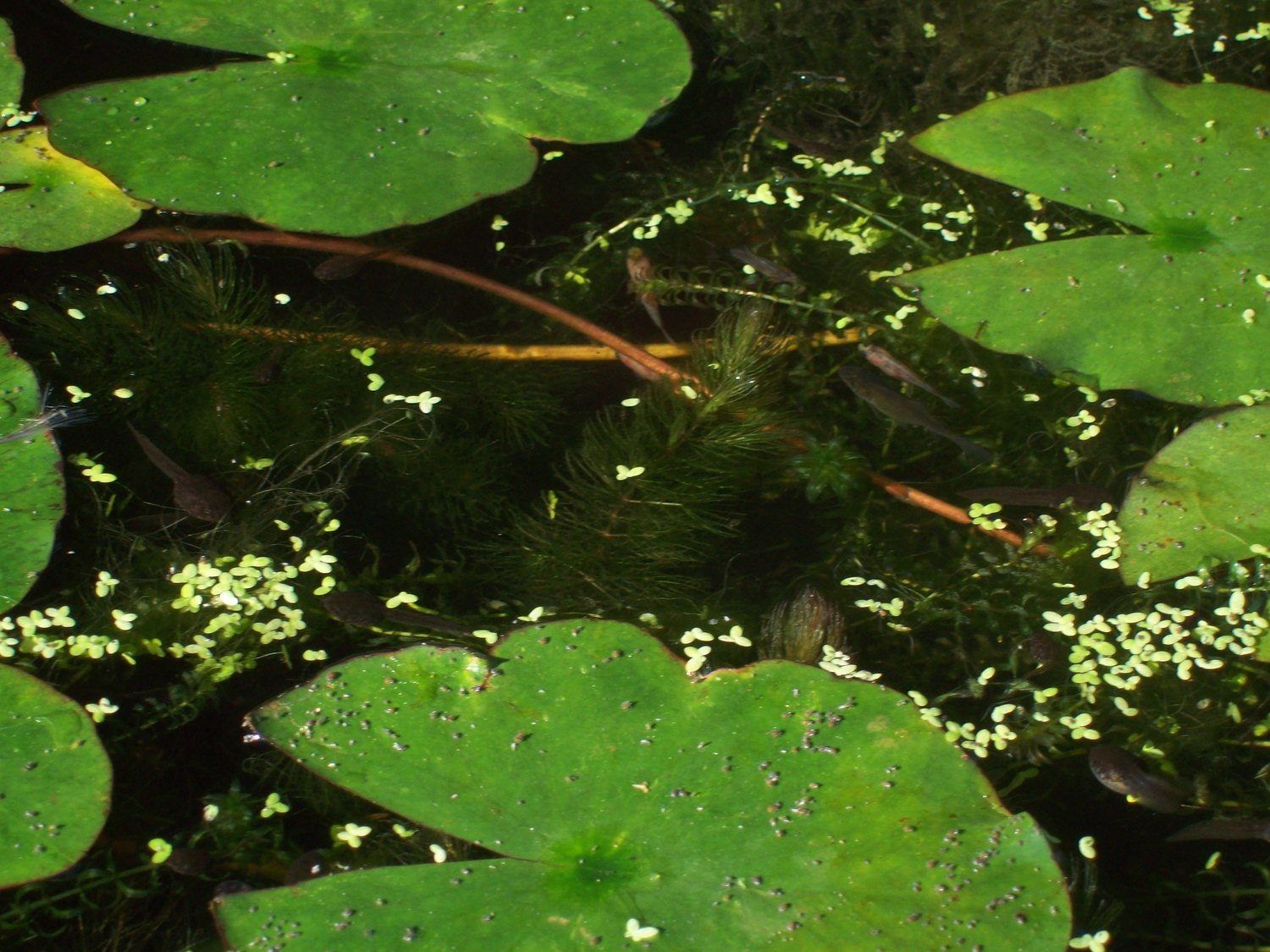 The same sized fry tend to hang out together and they scatter when the bigger fish swim nearby. I know that Shubunkin will eat their own eggs. In fact I’ve seen the smaller fish going through the same plants after the larger fish spawned in them and I know they are sucking eggs off the plants. I imagine the bigger fish would eat their fry too if they got a chance. 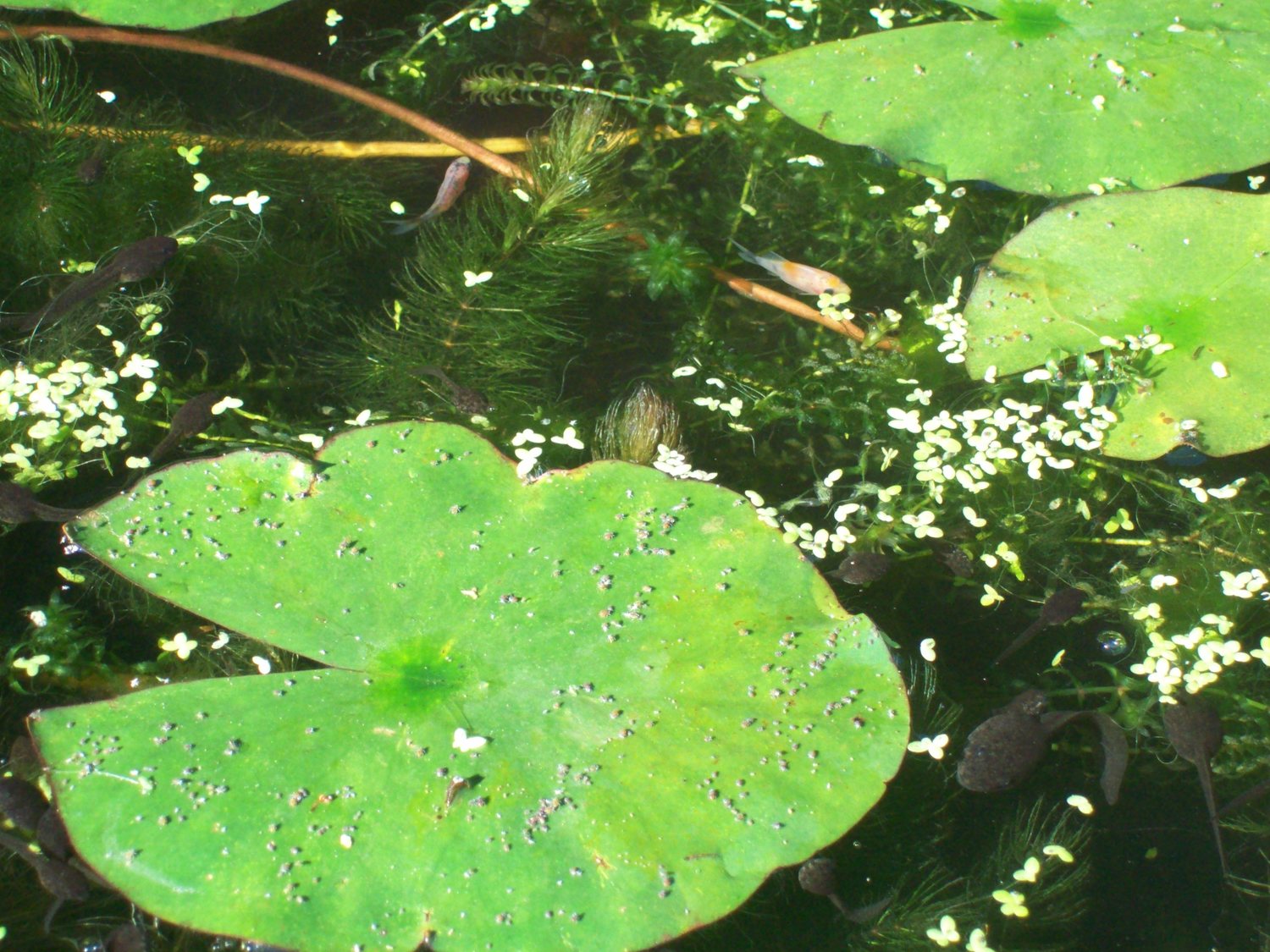 I’ve noticed colour differences in the fry too. I’ve got at least three out there that are dark, almost black. You can see one of them off to the side in the shot two photos back. Most of the fry start out white and change colour as they grow. It makes them easy to spot in open water. Here’s one fry that is starting to change colour. Shubunkin are like calicos. They can be any combination of white, blue, black, yellow, orange and red. They are such pretty fish. 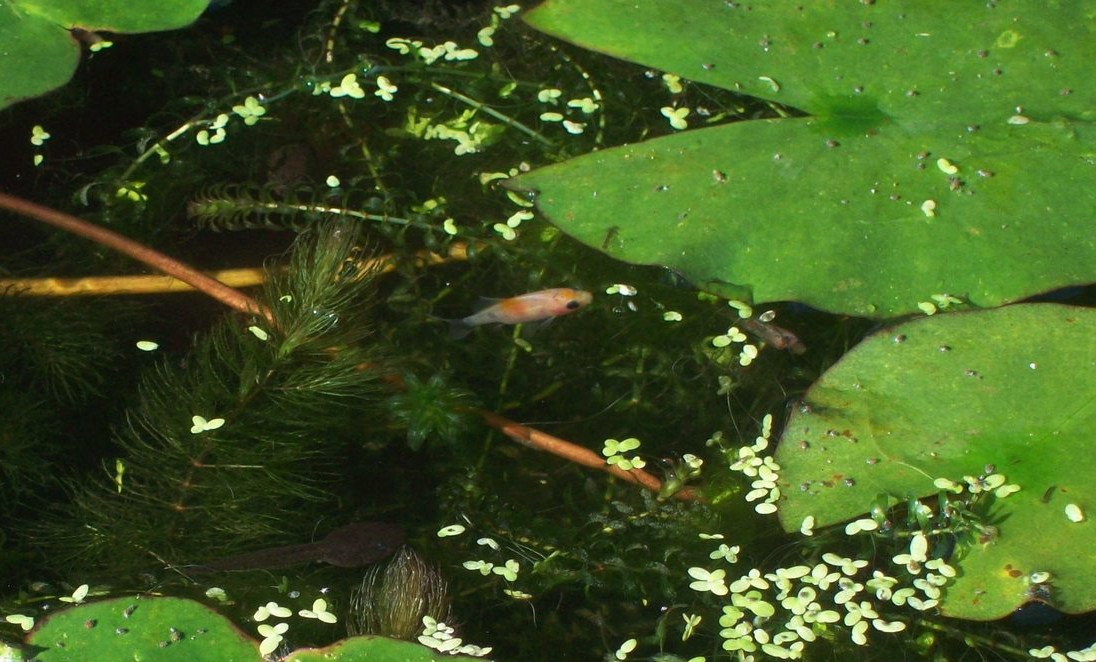 With all the Covid-19 restrictions and being off work and staying home, it has been a delight to have time to spend with my pond. Getting to watch the babies grow and change has been so special. Water gardens and ponds bring such life to a backyard. I highly recommend putting a water feature in if you can. Even a big tub on the back deck can add something and the sound of running water is so relaxing. It’s lunch time now. I think I’ll take my lunch outside and see what the fish are up to.