I love feeding the birds year round. We have a nice variety of birds in our yard because we have a ravine at the back with plenty of old growth forest. We get different birds coming through in the warmer months so I like to keep the feeders out to attract them as well as the year round birds. The feeders do more than attract birds though. They also attract rodents! 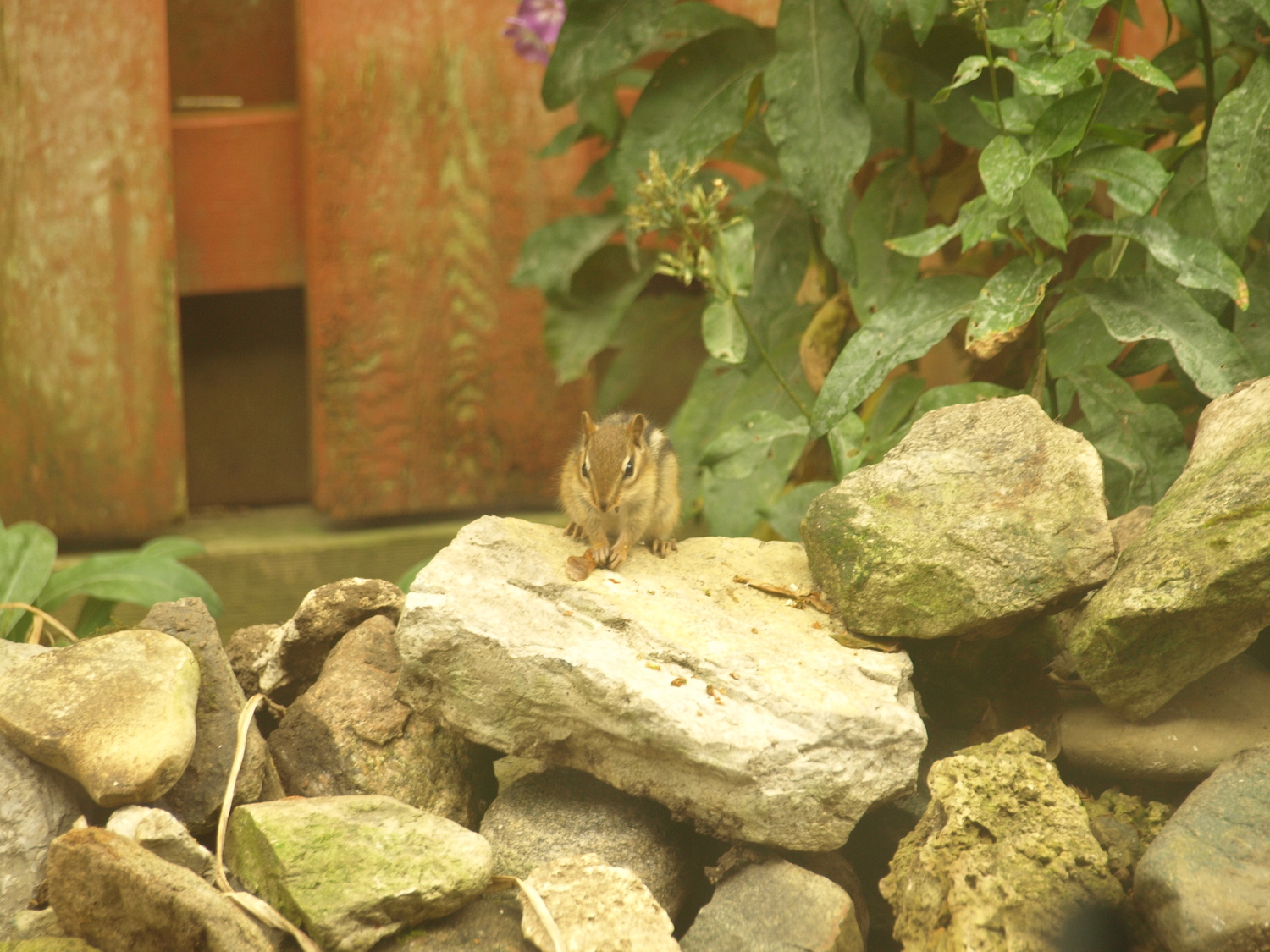 As I menitoned in my last post, we are having a boom in the rodent population this year, both chipmunks and squirrels. I’m sure this winter it will be the squirrels I’ll be complaining about but this spring it was the chipmunks driving me crazy. They are simply too well designed and I have spent a good deal of time and effort trying to keep them from doing what they do so well.

In the spring it started with holes - everywhere! Forget trying to plant annuals in my planters. I’d plant 5, they’d dig up 3. I’d replant, they’d redig! I planted a couple of rows of peas in a long planter. They dug out most of them. I found a few peas on the surface and stuck them back in. When they started to come up, I saw how many were missing so I reseeded. And a third time when I saw how few came up from the second planting.

I had the same trouble in the garden. They were digging up my coral bells and eating the roots. I bought a toad lily and before I could even get it in the ground they had dug into the pot and started eating the roots and breaking the stems. I planted a couple of milkweed that we dug out of a ditch. They were in full bloom and smelled lovely. I was hoping to attract Monarchs. The chipmunks climbed them to get at the flowers, which they ate. Their weight toppled the weakened stems. The rabbits did the rest - no Monarchs for me!

I bought some plastic grids with spikes that are supposed to prevent digging and they do a fair job, so long as I stake them down. If I don’t the chipmunks simply move them aside and resume digging. Unfortunately I can’t line all my gardens with them so I used them in my veggy planters in the hopes that I would have something to harvest.

I have two feeding posts in my backyard. The one on the lawn is the taller of the two and has a squirrel baffle so the rodents can’t get up the pole. Hanging from it I have black oil sunflower seeds, shelled peanuts and a jelly feeder for the Orioles. 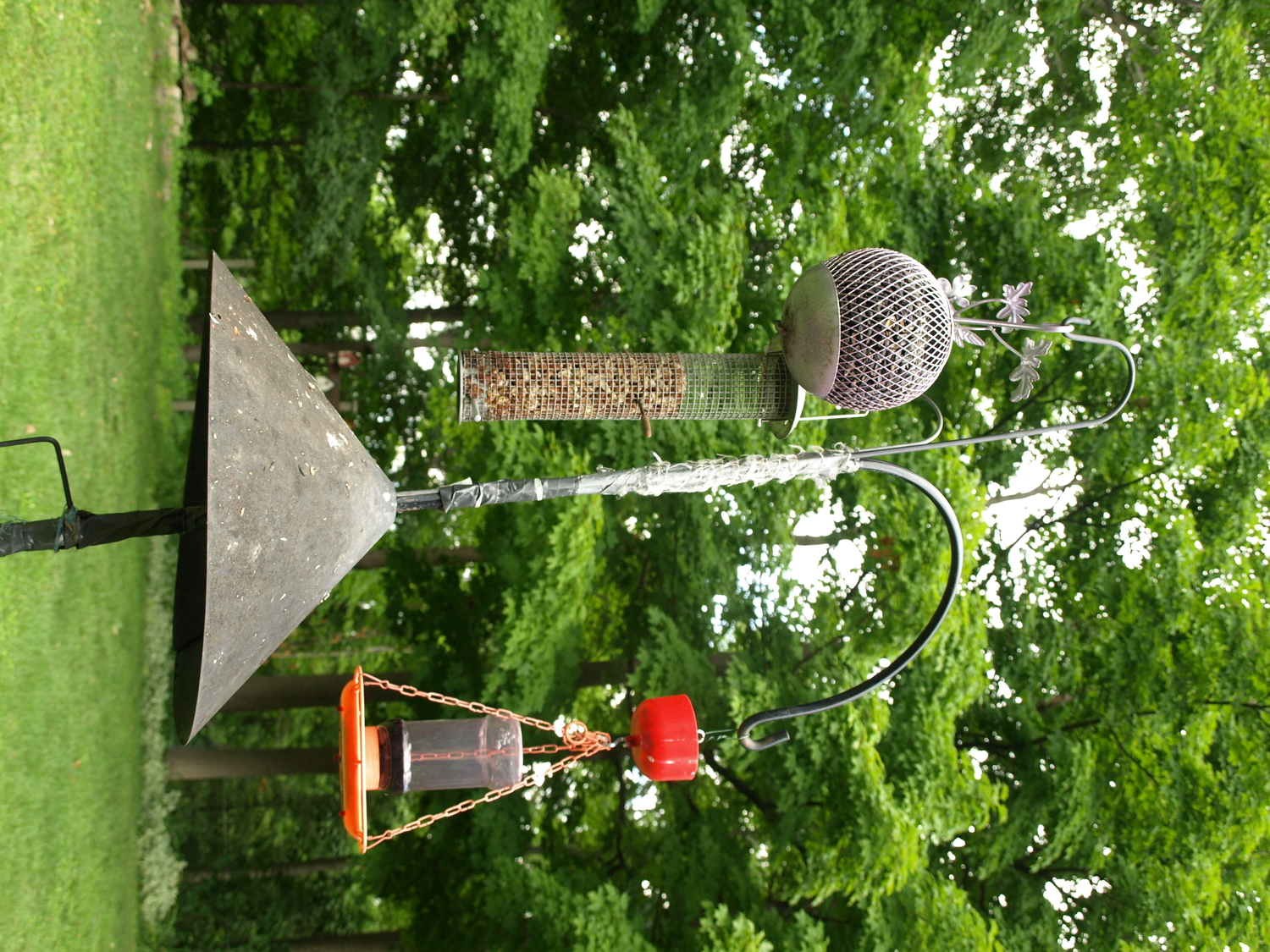 The other pole is in the garden by the pool. It is shorter which makes it easier for the rodents to raid. I have a squirrel proof feeder but the chipmunks aren’t heavy enough to trigger it. If they can get to the feeder, they can stuff themselves with sunflower seeds. 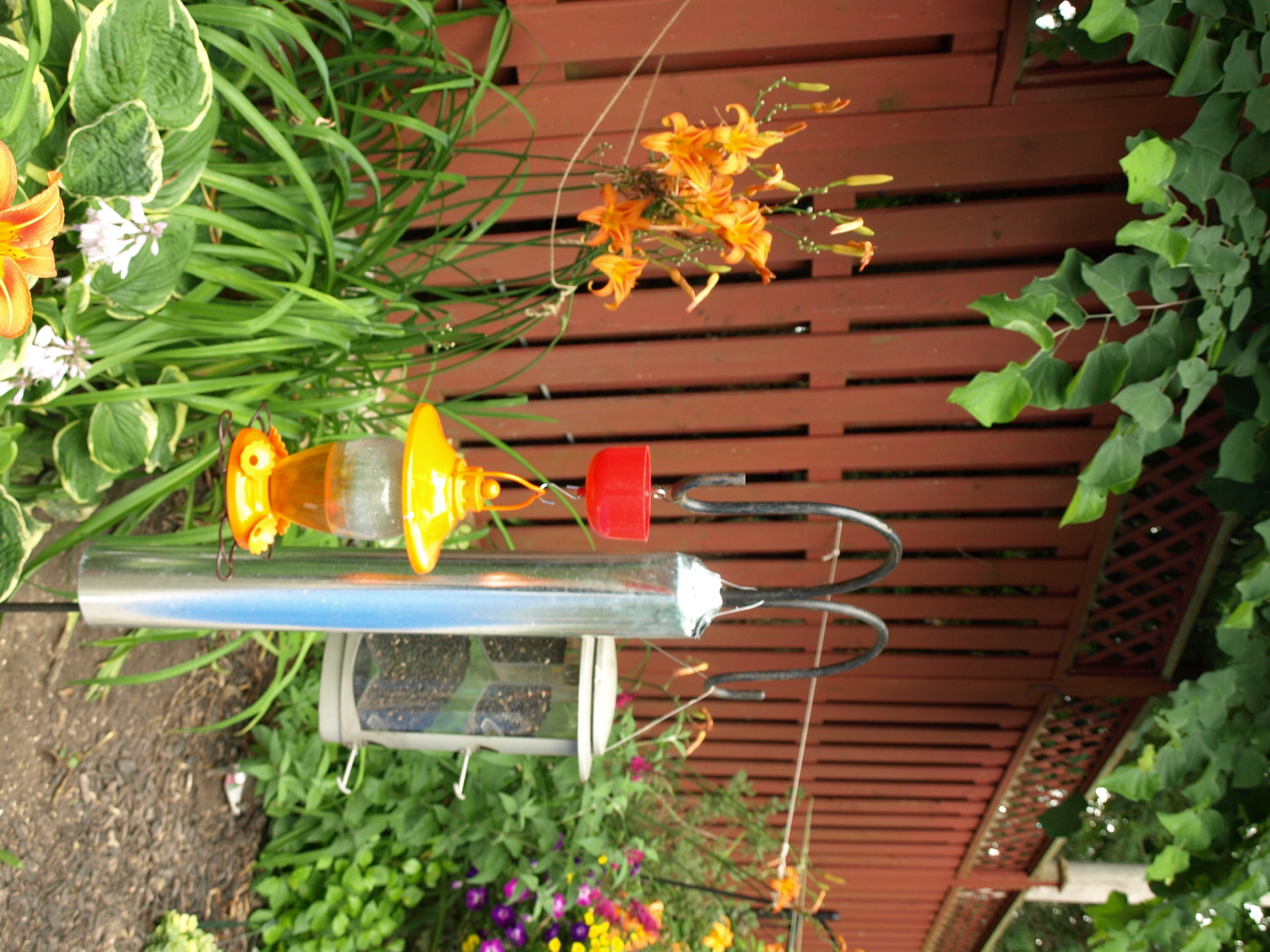 I had to remove the squirrel baffle from the shorter pole because the squirrels figured out that if they could get above it, they could lie across it and pull the feeder towards them to access the feeding ports without their weight sliding the plastic guard down. Without the baffle in place The chipminks could run up the metal post and hop onto the feeder.

I tried greasing the post with lard. That was fun to watch for a while but it needed to be re-greased almost every day. We bought a length of stove pipe and fastened that on. It worked beautifully! We crimped the top so it was snug to the pole and the chipmunks could climb under it but not out the top. Neither rodent could climb the stove pipe.

I figured we had them beat. Nope! I looked out a week later to see a chipmunk sitting on one of the ports stuffing his face. One of the most aggravating things about chipmunks is that they aren’t just eating for today, they are hoarding for the winter. They will clean you out and still come back for more! I scared the chipmunk off the feeder and then backed off to watch the little monkey.

Clever? This one was a chipmunk Einstein! As I watched, he climbed the stalks of a nearby day lily and “rode” it to the feeder’s perch. He had it down to a science. He’d inch along the stalk, judging the distance as the stalk swayed and dipped under his weight. At exactly the right time he stepped off the stalk onto the perch. I didn’t know whether to scream or laugh! It took me a couple days of tying up the lilies before I got it just right to prevent him from reaching the feeder.

You’d think that would be the end of it, but no. There is a hosta that grows under the feeder and a chipmunk figured out how to climb the leaves enough to jump onto the lowest feeding perch. I cut back hosta leaves a bit at a time over the next few days until I figured I had him beat. Nope! This chipmunk was Michael Jordan and he could jump from the ground, most of the time, and grab the perch and heave himself up. More feasting!

I dithered between removing the feeder and other options. I was so frustrated trying to out-think a rodent! I really like having that feeder in the garden so I can watch the birds from the pool. Plus the cardinals, grosbeaks and finches all love this feeder. Finally I decided that one fewer ports was better than no feeder at all and I tied the perch vertically against the feeder. It means that no one can use that perch but it also means that the chipmunks haven’t been on the feeder for a couple of weeks now.

In retaliation, possibly, they have started pulling little green tomatoes off my grape tomato plants, taking a bite and leaving the rest. Every day I find a little tomato, on the ground under the plant, with a bite out of it. You would think that they would remember that they don’t like green tomatoes but no.

I had a few issues with the squirrels too but nothing like the chipmunks. I had the baffle on the lawn pole too low and the more athletic squirrels figured out that they could jump and spring board off the baffle and grab the jelly feeder. They would then jump to the pole above the baffle and gain access to the sunflower seeds and peanuts.

In the garden, the stove pipe fixed them for a while but then they learned that they could jump, 4 feet, from a nearby box and land on top of the shephard’s hook that held the feeder. This wasn’t much of a problem since the squirrel proof feeder did it’s job very well. The point was that they kept trying. New squirrels would come and they would try too. They were scaring away the birds.

I decided to reward them with a distraction instead of trying to get rid of them. I bought a corn cob feeder and put it in the back of the yard far from the other feeders. It’s on a short little hook and easy for the rodents to feed from. I give them one corn cob per day and they usually have it cleaned off by mid afternoon. As a distraction it works like a charm and keeps them from being so determined to raid the other feeders. 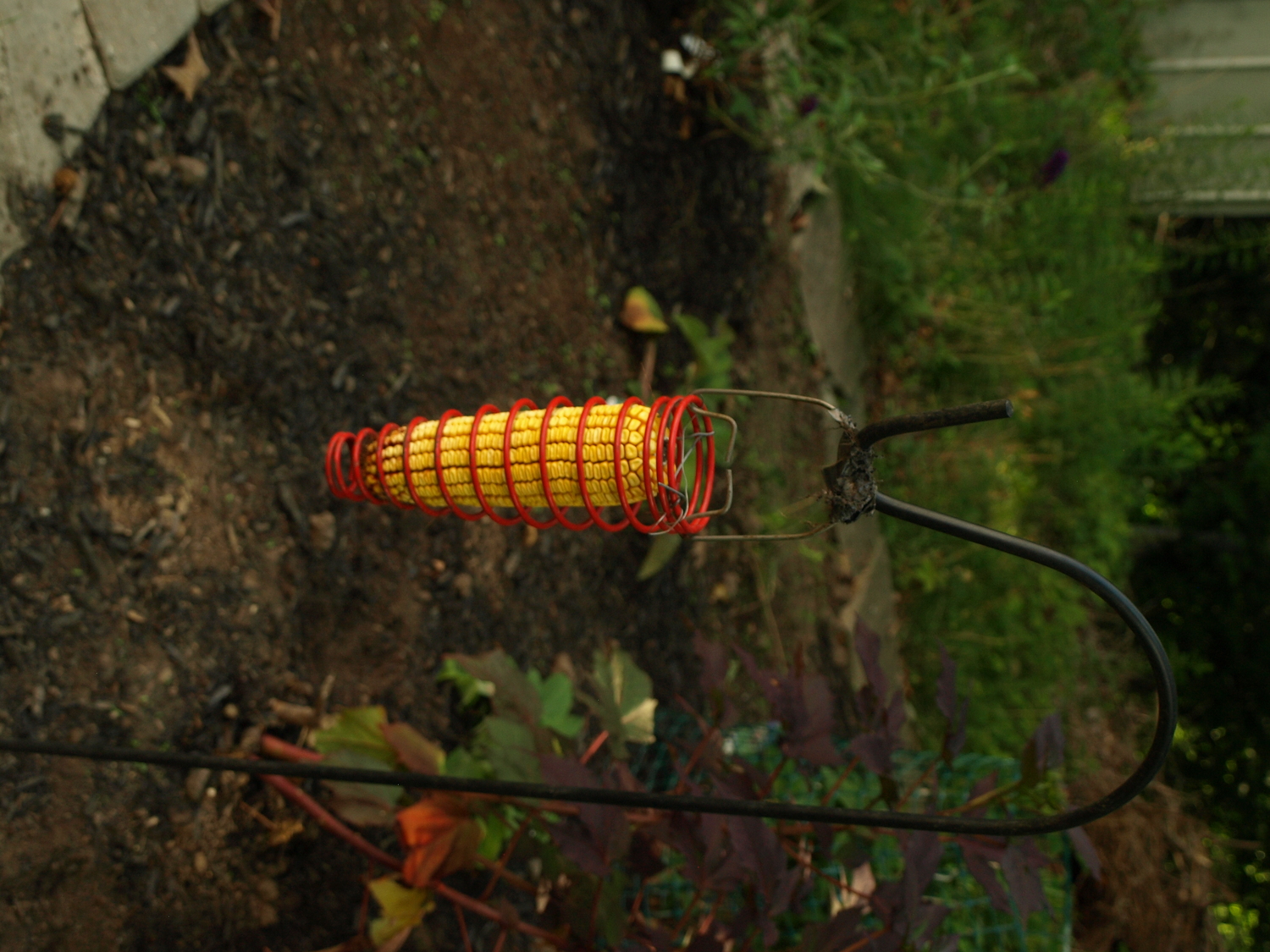 I had a corn cob feeder years ago but lost it - actually it was kidnapped by the squirrels! This is why I knew what needed to happen this time. In order to keep the squirrels from taking feeder, cob and all, I have to duct tape the handle of the feeder to the shephard’s hook. The other trick they have is to push the feeder handle out of the way so that they can pull the cob back out and take off with it. To prevent this I have had to wrap a couple of pieces of wire across the opening where the cob goes in.

The lengths I go to to enjoy the birds in my backyard make me shake my head. I am in awe of the characteristics God has given the rodents. They are tenacious, driven, nimble, clever and bold. Their antics have caused me to rant and laugh, often in the same breath. I wonder what they’ll have in store for me next?