I love hollyhocks! We used to live on a farm and the two large gardens beside the house were given over entirely to hollyhocks. It was a beautiful display during bloom time. When we moved to our current residence, I decided to plant a butterfly garden and bought a couple of hollyhocks for the back, along the fence.

I really like the double flower varieties and picked out a buttery yellow one and a dark pink one. They have had a tough year so far, what with the drought here and the pests getting after them. 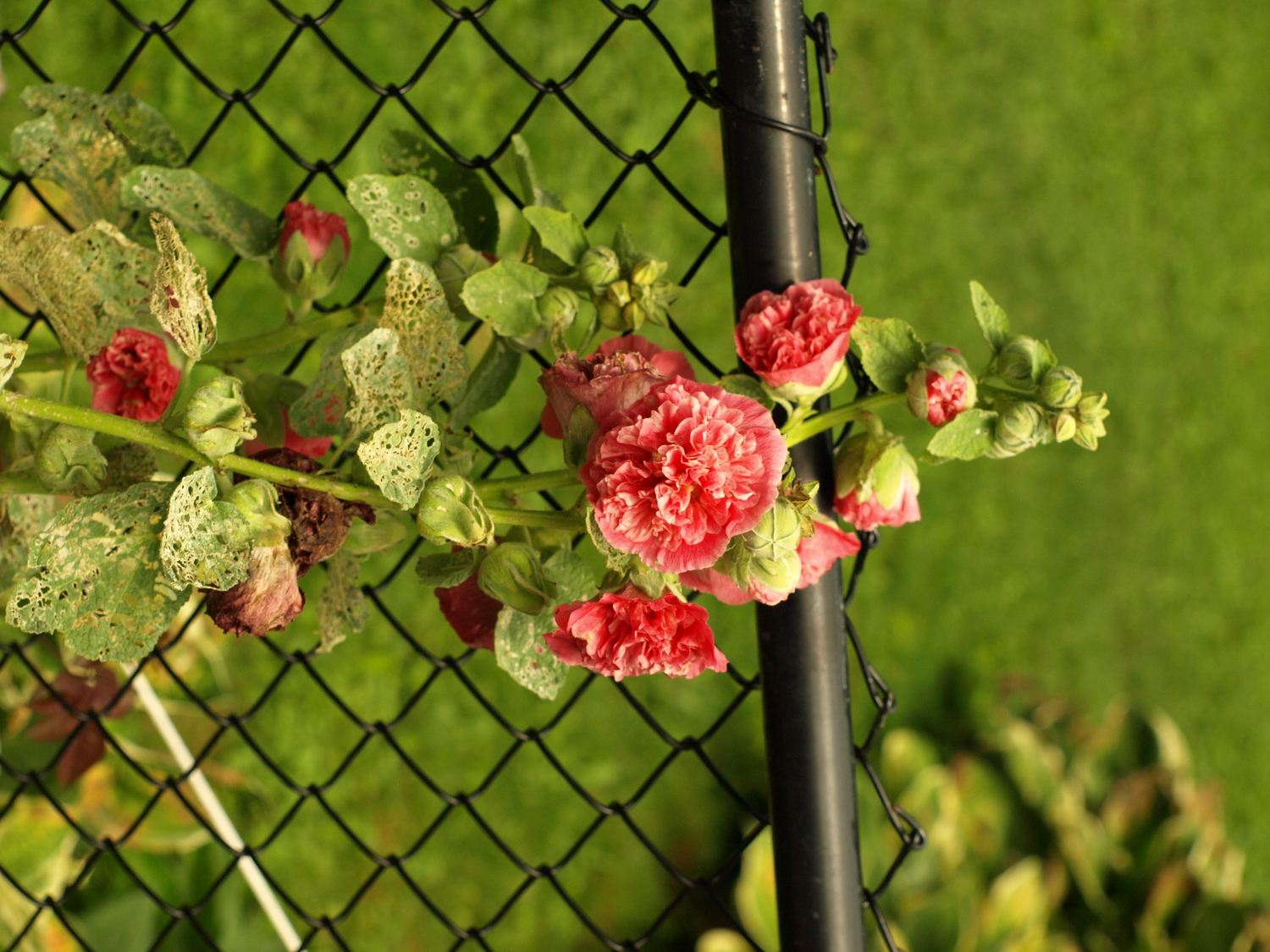 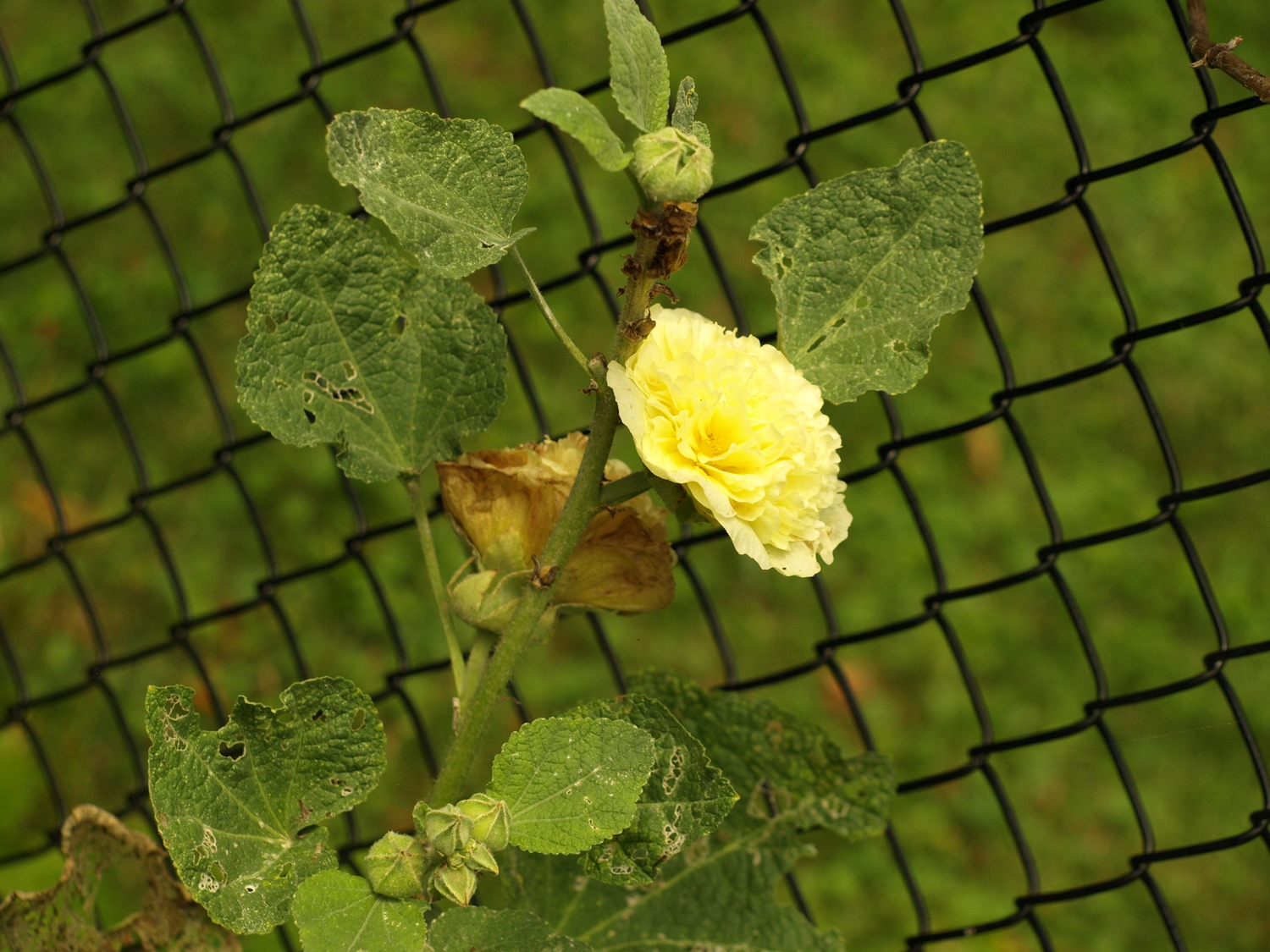 We had a major rodent population boom this year and although I do have bird feeders out, which the chipmunks and squirrels scavenge under, the chipmunks were also eating the buds of various plants. The hollyhocks have such nice big buds so they were regular victims.

We’ve lost several chipmunks to the pool since then and the population in the backyard seems to be under control now. They have stopped eating the hollyhock buds at least. Enter a new pest.

I noticed that the leaves on my hollyhocks were starting to look like lace. Skeletonized is the proper term. After doing a bit of research online I learned that the most likely culprit is sawfly larvae. I had seen little green caterpillars on the leaves. I tried spraying them with a general insecticide that I have but it didn’t seem to do much good. 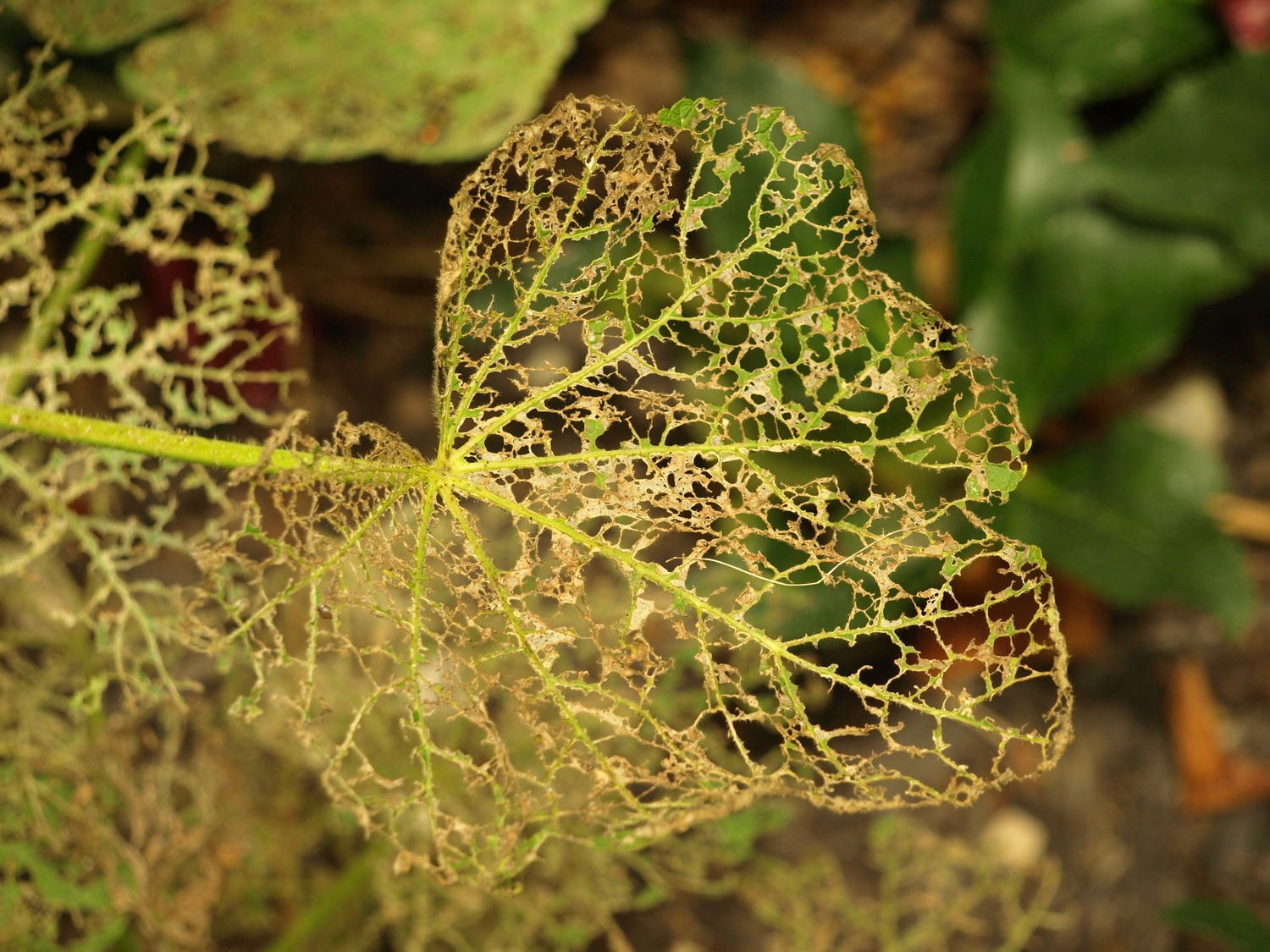 Turns out they weren’t caterpillars at all but little green worms. I have seen adult sawflies in our yard, although I didn’t know what they were. They look like small, twitchy wasps but thicker bodied and no stingers. Apparently they favour roses to lay their eggs on and since I don’t have roses, hollyhocks will do nicely being from the same family. 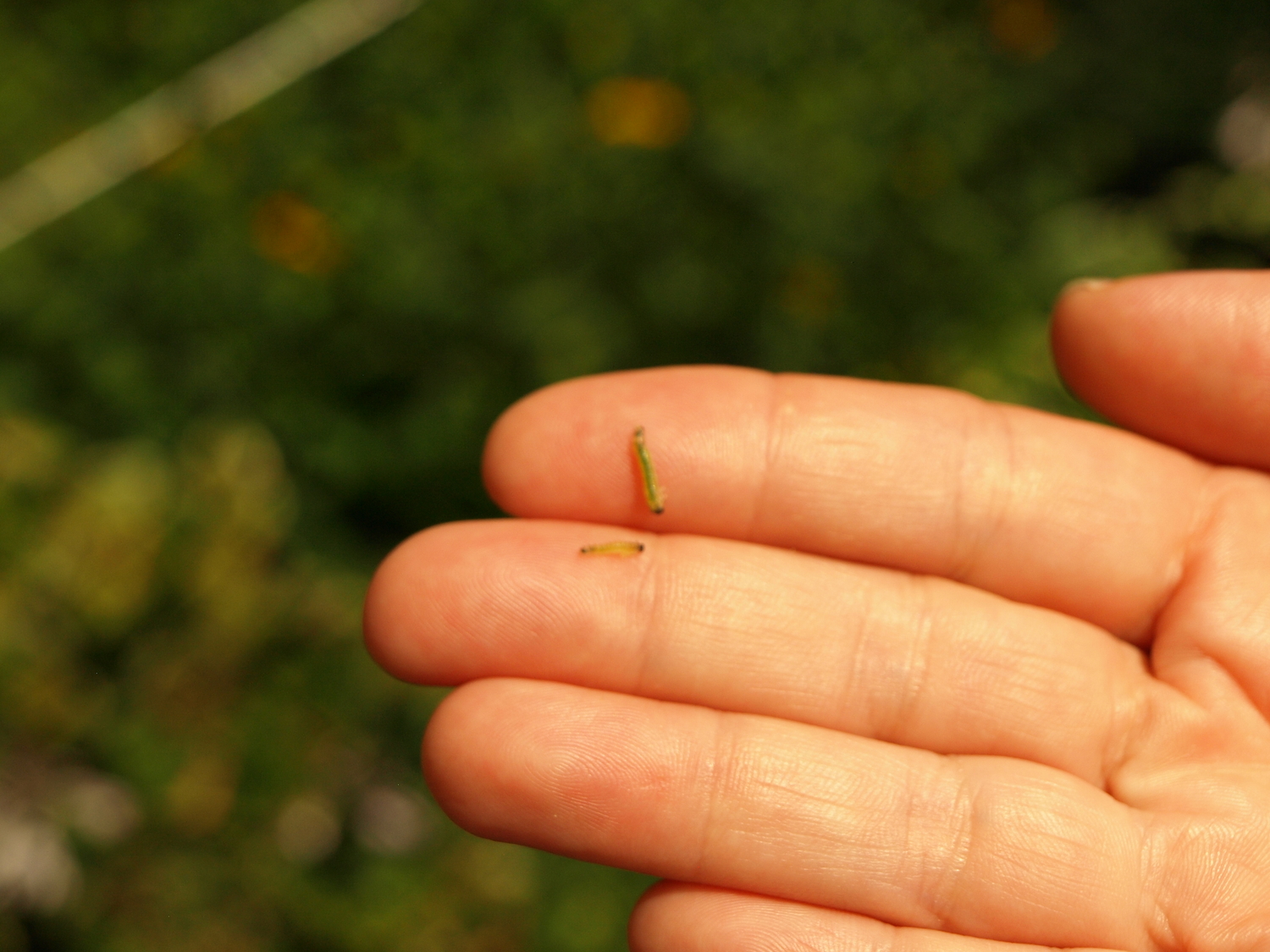 I have noticed the larvae and similar damage in past years but not to the extent I’m seeing this year. My poor pink hollyhock has few healthy leaves left.

Picking the little blighters off is one way to go and doesn’t take long. I brush them off the leaves into my palm and then launch them into the lawn as far away as possible. As I said, I’ve tried spraying them with varying success.

I read that you can send them flying with a good spray from a garden hose. The method I think I’m going to enploy is to mix up some detergent and water in a spray bottle and go out each day and squirt them. It’s time consuming but worth it. They say there’s little chance of the larvae killing a large established plant but it looks like a mess and it does weaken the plant since it has very little left to photosynthesize with.

Maybe next year I’ll be on the ball and go egg hunting before they hatch in the spring. Thankfully both hollyhocks are blooming beautifully, as long as you don’t look down! 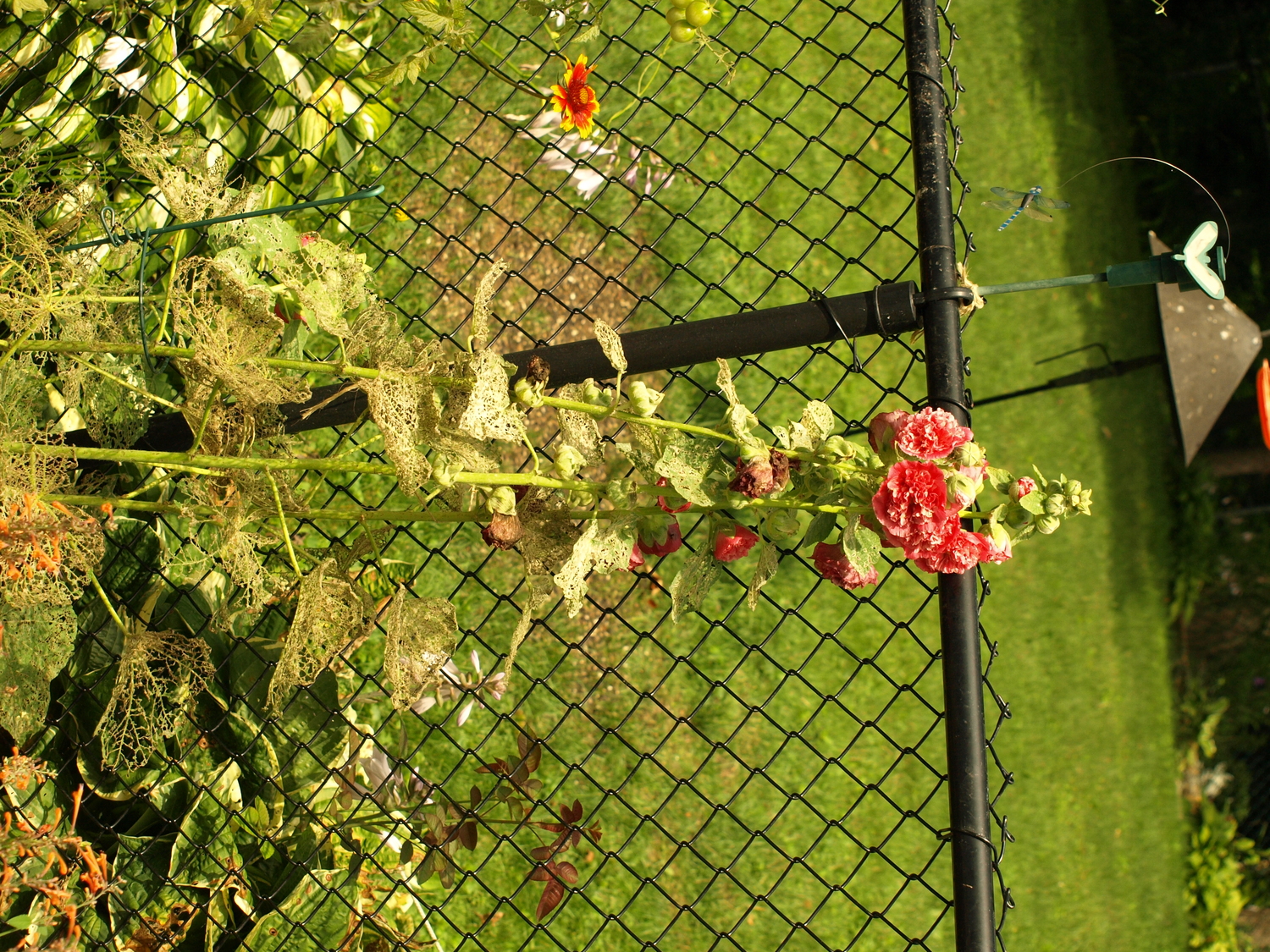